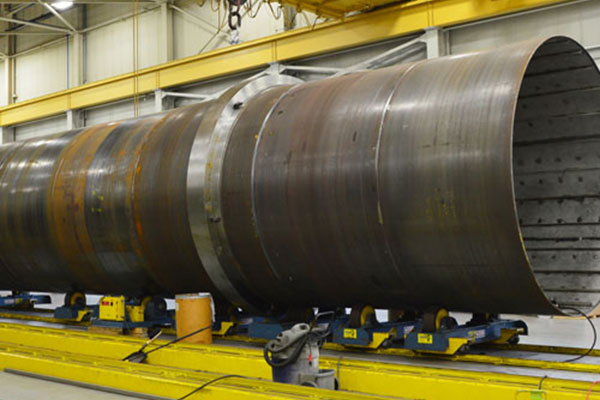 The crew is finishing up work on a large steam-powered dryer which will ship to an ethanol plant in North Dakota to dry corn. It measures 70′ long and 11′ 6″ in diameter and is fabricated of carbon steel. The total weight is almost 300,000 pounds. “It is physically one of the largest pieces we’ve ever built,” says Gary Cline, Chief Operating Officer and a 28 year veteran of W. Soule.

“We built a smaller dryer two years ago which was also commissioned for Davenport Dryer. It was only 70 feet long and 8 feet in diameter. Although smaller, it was fabricated of hastelloy alloy, a material much more challenging to work with,” says Jerry Ruoff, Project Manager.

The crew has worked almost 4,000 hours over the last eight months to complete the piece.

On Tuesday, Aug. 19, 2014 cranes will move the dryer outside the building. The semi-trailer will be built around the dryer and it is all scheduled to hit the road on Friday, Aug. 22.

The dryer will be suspended between two semi-trucks, one pulling and the other pushing the dryer. In accordance with state regulation, the semis will have travel at up to 40 miles per hour. It will be too tall for some expressway overpasses and will have to exit and re-enter the expressway at those points. It will also have a police escort in some states, including Michigan. The moving crew taking it to North Dakota has already successfully delivered another dryer to the same group this summer.